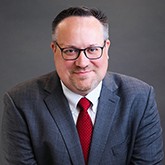 Patrick Ryan is Senior Vice President – Engineering and Technology for ABS. He is responsible for global engineering, digital engineering, rules and software, research and development, and the Global Ship Systems Group.

Ryan is known for his vision and energy in digitizing maritime engineering and is leading ABS through their digitalization of Class in engineering, plan review, and beyond. His team has the unique responsibility to help ship owners, designers, and builders bring their plans into the digital world, and to lead the development of new technologies that will support remote and condition-based class services – all while never deviating from the ABS mission of making the world a safer place and protecting the impact on the environment. Ryan believes that digital technologies go hand-in-hand with the ABS mission.

A naval architect, Ryan’s career has always been focused on great ships. For over 20 years prior to joining ABS, he was in a design and construction role, and most recently responsible for digital innovation around those two big processes at Newport News Shipbuilding. Ryan was at the forefront of their digital transformation; he founded their digital innovation lab, led the development and implementation of CAE, CAD, and digital twin technologies to support Engineering and Design for several major shipbuilding programs, and held a senior position in Corporate Strategy where he wrote several of their digital strategies. Ryan has authored seven U.S. and international patents on industrial augmented reality technology, and in 2017, Smart Industry Magazine named him one of the “Top 50” industrial innovators in Smart Technology. Early in his career, he was well-known as a Navy computational fluid dynamic expert, and he won the prestigious Doug Ensor Award for his leadership and work in Naval hydrodynamics.