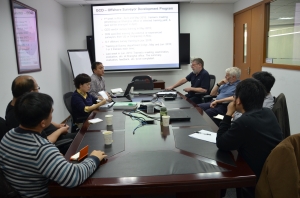 Over the last few years, the China government has encouraged the transformation of its domestic shipbuilding industry to increase its presence in the offshore marketplace. An increasing number of offshore projects have been under construction in Chinese shipyards, the majority electing to use ABS as their classification society.

As the transformation of conventional Chinese shipyards continues to incorporate offshore projects, ensuring that a sufficient number of experienced offshore management teams are ready to assist has become even more important. To respond, ABS GCD developed and initiated the Offshore Surveyor Development Program (OSDP) in 2014. This program was designed to encompass critical offshore surveys, project management skills and knowledge which benefits ABS and the industry as a whole.

The OSDP consisted of 3 rounds of training with specific content and goals for each round. The first round included: general items, document control and management as well as safety-related concerns. The second round was focused on vendor surveys, hazardous areas, cantilever weighing, inclination, jacking trials and UK HSE guidance. The third round placed emphasis on commissioning, classification of drilling systems and delivery.

The training took place over approximately 6 months and involved all 6 districts in GCD. Representative major offshore shipyards were selected as the training yards. Eight qualified and experienced offshore surveyors were requested and agreed to assist with this training initiative. Fourteen surveyors, all of whom had at least 4-5 years of experience, were nominated by their respective District Principal Surveyors in order to maximize the benefit of the OSDP.

To ensure consistency, the trainers assigned specific goals for the trainees and a sign-off sheet was developed by the GCD Offshore Survey department covering 19 subjects, including the MODU Rules and MODU Code. Each subject contained several items which the trainees were required to be familiar with to the satisfaction of their trainers.

After completion of the training program by end of 2014, positive feedback was received from the trainers and trainees on the effectiveness of the OSDP. Attendees considered this program as the most beneficial way to accelerate the training of offshore surveyors as project leads.

The second generation of the OSDP is now ongoing and is divided into two groups. The first group is expected to be completed by July 2015 and the second group should conclude by the end of the year. Four surveyors have been selected as trainers to assist with this training program.