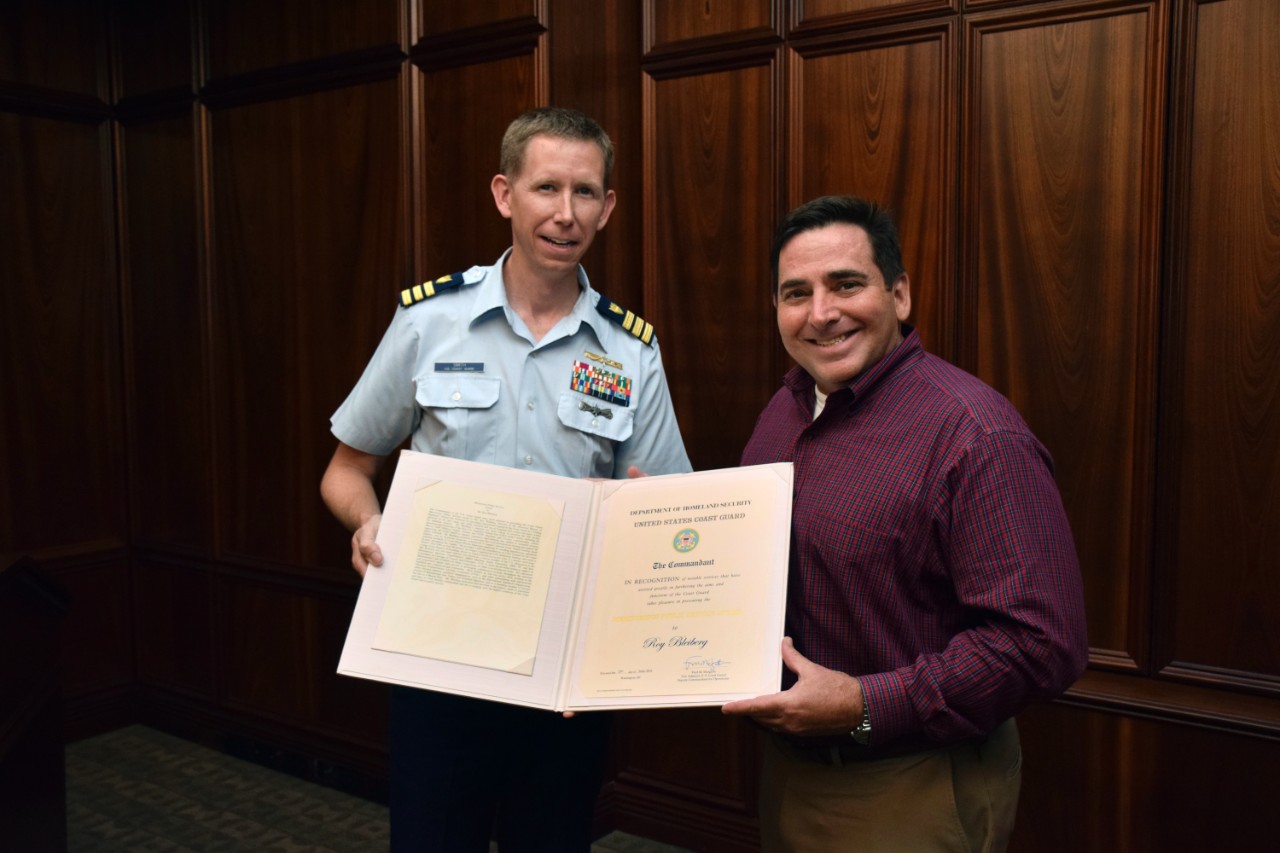 (Houston) ABS, a leading provider of classification and technical services to the global marine and offshore industries, is pleased to announce that the United States Coast Guard (USCG) has awarded Roy Bleiberg, Vice President of Engineering for the ABS Americas Division, the USCG Meritorious Public Service Award. The award is the second-highest public service award presented by the USCG to civilians who provide substantial contributions that results in advancement of the Coast Guard’s mission and benefit the general public.

Commander Jason Smith, Detachment Chief, USCG Liquefied Gas Carrier National Center of Expertise, presented this prestigious award at a ceremony at the ABS World Headquarters on Wednesday, 27 July. The citation notes that Bleiberg was selected for the award for his “unparalleled support to the Coast Guard as a leading advocate for the safe, clean, and viable transport and use of compressed gases within the maritime industry.”

Some of Bleiberg’s notable achievements at ABS include successfully advocating for the safe design and operation of multiple novel maritime gas projects and technologies, training USCG personnel to better understand gas cargo and usage as marine fuel, and supporting the USCG and other safety focused organizations in developing domestic and international gas regulations, standards, and policies.

“ABS has played a leading maritime industry role in the North American gas revolution,” says ABS Chairman, President and CEO Christopher J. Wiernicki. “Roy’s work in this area is exemplary, and on behalf of ABS, I congratulate him for this tremendous honor.”

ABS has established itself as the premier classification organization in supporting the North American gas industry. The first Liquefied Natural Gas (LNG) fueled vessels in the United States – the Harvey Gulf Offshore Supply Vessels and TOTE Maritime containerships – and first LNG bunkering vessels in North America were developed with ABS involvement. The organization also plays a leadership role in the development of LNG bunkering infrastructure, producing the landmark ABS study Bunkering of Liquefied Natural Gas Fueled Marine Vessels in North America, which is a roadmap for designers, builders and vessel owners looking for guidance in understanding the regulatory requirements around this growing market. ABS served as the class organization for the gas carrier that moved the first US LNG exports from Sabine Pass and classes the world’s largest and most advanced gas carriers and gas fueled vessels.