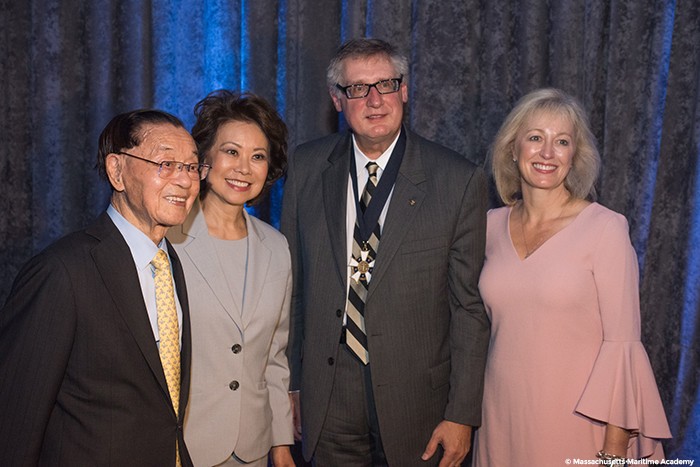 (Houston) Christopher J. Wiernicki, Chairman, President and CEO of ABS, was recognized for his distinguished career of excellence, innovation and service to the maritime industries by the Massachusetts Maritime Academy (MMA) as this year’s recipient of the Maritime Person of the Year Award on September 21, 2017 in New York City. The honoree is presented with the Captain Emery Rice Medal and awarded annually to a civilian or military leader from around the globe. Named for an 1895 MMA graduate and World War I hero, Captain Rice was recognized twice by Theodore Roosevelt for his maritime skill and bravery as a shining example of American courage and fighting spirit.

“As only the 22nd recipient of the Captain Emery Rice medal, I am honored to accept this award, not for me, but rather on behalf of the more than 5,000 worldwide employees of ABS who dedicate their lives to promoting safety every day and have taught me the true lessons of service and humble leadership,” Wiernicki said.

“Others who have been awarded the Captain Emery Rice Medal each are exceptional leaders and industry giants through their significant contributions,” Wiernicki added. “Each of these leaders is unique and revered in their own right, and having the privilege to know and work with many of them during my career continues to be a highlight and an honor.”

In his remarks, Wiernicki thanked Massachusetts Maritime Academy and government and industry executives in attendance whose “vision and leadership move the maritime industries forward every day. We all can learn from the true leadership we witnessed during recent weeks along the Texas Gulf Coast and across Florida following two very destructive storms. We can never truly fully thank the selfless servants who are first responders and the courageous mariners who sail the world’s oceans and waterways, especially never forgetting the families that support them each and every day,” he said.